In 1994, in the international bidding for the construction and procurement of Shantou Bay Bridge, our company developed the first XF Ⅱ - 160 bridge expansion device in China, which beat the international giants and won the bid for the first time in China. It ended the history of relying on imports for large-scale bridge expansion devices in China and opened a new historical era for the independent production of this industry in China. In the past 15 years, the bridge is still shining, and the bridge expansion device has also been developed by leaps and bounds in our country. At that time, President Jiang Zemin personally wrote the name of the bridge, personally went to the site to attend the foundation laying ceremony and personally activated the start button.

It was started in November 1911 and opened to traffic in 1995. It is located at the sea area of Ma Yu island at the eastern entrance and exit of Shantou port. It is a cross sea highway bridge. The total length of the bridge is 2500m. It is divided into North approach bridge, main bridge, south approach bridge and lead embankment on both banks. There are two-way six lanes. The net navigable span of the main opening of the bridge is 452m, and the net navigable height is 46m. It can pass 50000 ton ships. The main span is a three span double hinged prestressed concrete reinforced box girder suspension bridge.

This bridge is a supporting facility for the first-class automobile special highway between Shenzhen and Shantou, and a land transport link connecting the four special economic zones of Shenzhen, Zhuhai, Shantou and Xiamen. The bridge expansion device is constructed by China Railway Bridge Bureau and supplied by Hengshui Rubber Co., Ltd.

This is the first modern large-span prestressed concrete suspension bridge in China. It was inscribed by Jiang Zemin and the start button was started. Many new technologies and processes of the bridge have reached the world's first-class level. The main beam adopts the site prefabricated single box three chamber prestressed concrete thin-wall stiffening beam. The traction technology of the main cable erection of the suspension bridge is advanced in the world and leading in the country. The measures of canceling the customary wind resistance system in the capping works of the main cable erection are advanced in the world and leading in the country. The new technology of saddle reset during the main beam erection is, It is the first time in China to adopt the bridge expansion device with independent intellectual property rights. The bridge was built with the participation of Hong Kong famous industrialist Li Ka Shing. 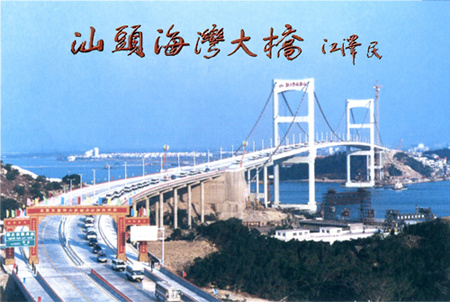